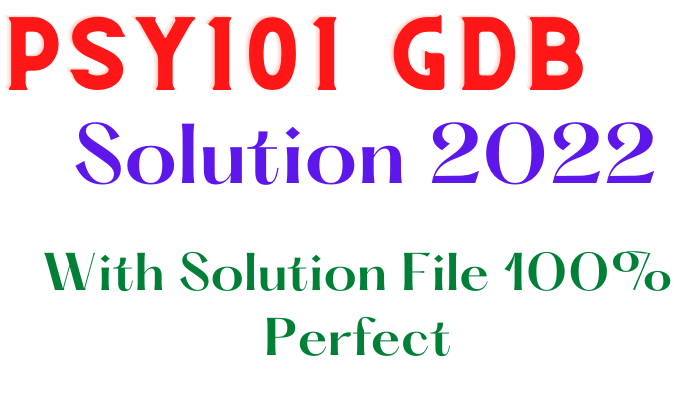 In this post, we are going to offer you the Psy101 GDB 1 Solution 2022. If you are student of psy101 then stay with us to get this Group discussion topic better understanding.

Neo Freudians were the followers of Sigmund Freud but developed their theories. Mention at least three reasons why they differed from Freud’s Psychoanalytic approach?

Who were Neo Freudians?

The neo-Freudians were psychologists whose work followed from Freud’s. They generally agreed with Freud that childhood experiences matter, but they decreased the emphasis on sex and focused more on the social environment and effects of culture on personality.

Why these Neo-Freudian thinkers disagreed with Freud?

Neo-Freudians emphasize conscious rather than unconscious thought. Neo-Freudians view sex as less important than Freud did. Neo-Freudians inject a focus on interpersonal relationships as a source of psychological difficulties.

Before discussing their difference, we must have to understand the Psychoanalytic approac. Psychoanalysis is defined as a set of psychological theories and therapeutic techniques that have their origin in the work and theories of Sigmund Freud. 1﻿ The core of psychoanalysis is the belief that all people possess unconscious thoughts, feelings, desires, and memories.

There were some other different reasons why these Neo-Freudian thinkers disagreed with Freud. for instance, Erik Erikson believed that Freud was incorrect to think that personality was shaped

Personality Theory. Neo-Freudians refers to those early followers of Freud who at some point

accepted the basic tenets of Freud’s theory but later dissented from it. Neo-Freudian or

and formed their schools of thought.There are a few different reasons why these Neo-Freudian thinkers disagreed with Freud.

Some of these are:

1.They placed more emphasis on the role of the conscious mind in interpreting

experiences and coping with the environment

2. They doubted sex and aggression were all-consuming motivations. instead, they

3. They disagreed with Freud’s belief that personality is entirely shaped by early

childhood experiences. Freud’s lack of emphasis on social and cultural influences on