Home News Why Neptune Climate is Changing in a Dramatic Way?
News

Why Neptune Climate is Changing in a Dramatic Way? 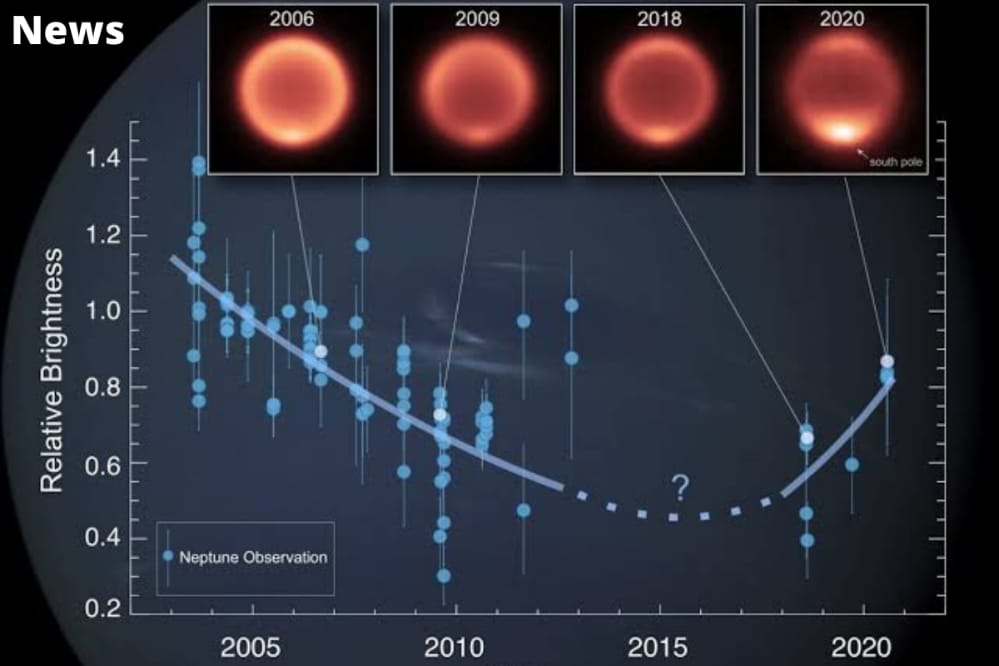 As we have seen that Terrible level of climate change is happening on the earth for the last two decades.  Whose responsible person is. Neptune is a planet in our solar system.

Scientists are puzzled and puzzled as to what is finally happening on Neptune, which is causing so much climate change. At the moment they have some way about this thing. Because, the climate of the planet Neptune is changing for 17 years when there is no human, even pollution.

Also Read: New largest comet ever discovered By Astronomers in 2022

At present, he does not have any kind of answer regarding this thing, but some speculations have been made. According to the report published in The Planetary Science Journal, the global temperature of Neptune, that is, the temperature of the entire planet, has dropped by 8 degrees Celsius between 2003 and 2018.

Neptune’s southern hemisphere is slowly moving towards the summer season, which will remain like this for about 40 years. But the surprising thing is that in the year 2020, the temperature of the South Pole of Neptune suddenly increased by minus 11 degrees Celsius from the temperature of 2018.

Neptune Climate is Changing in a Dramatic Way, Scientists are surprised by the fact that within two years the temperature has increased so much, while this work was expected to be done in the next 40 years.

Dr. Michael Roman, a postdoctoral research associate at the University of Leicester, said that such a rapid increase in the temperature of Neptune’s southern hemisphere was an unexpected event.

We didn’t expect it in the slightest. We know that Neptune’s Southern Hemisphere, the average temperature of Neptune is minus 220 degrees Celsius. Even if there is some heat, it is in the core of the planet.  Neptune receives from the sun.

Scientists know that there is a warm Polar Vortex on Neptune. Which is due to the higher temperature than the rest of the planet. But what is the reason for the seasonal change happening so frequently, it is not known. Or Why Neptune Climate is Changing in a Dramatic Way?

The best reasons that scientists think are – the chemical mixture of the planet, the stratosphere of Neptune, solar activities or weather patterns. Glen Orton, a co-author of this study and scientist at Caltech Jet Propulsion Laboratory, said that scientists came to know about the strange storms of Neptune many years later.

Our data shows that we are able to see the weather of only half of Neptune. That too is changing so fast that no one had any idea about it. It was all about Why Neptune Climate is Changing in a Dramatic Way?